Welcome to my website. I hope you enjoy your visit - - - Donald Hildreth 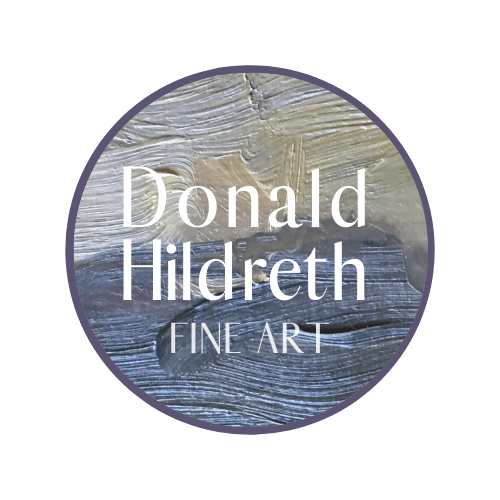 Rich hues, prominent shadows and a style that varies from impressionistic to near realism are some of the elements that distinguish the paintings of Donald Hildreth.

Donald was born in Los Angeles, California, graduated from UCLA  and worked as an engineer in the space program. He then ventured into Southern California real estate, buying, restoring and selling commercial and residential properties.

His formal art training began at age 50. Searching for a fulfilling challenge, he began painting and found a passion that he could pursue for the rest of this life.

Although, primarily self-taught, he has studied with such gifted mentors as Kim English, Ovanes Berberian, Jove Wang, and Ted Goerschner. His natural talent, which lay dormant for a half a century, may be genetically endowed: he is a direct descendant of Jasper Francis Cropsey, an eminent Hudson River School painter.

His paintings have been the subject of feature articles in Southwest Art and Art of the West magazines. Museum exhibitions include the Phippen Museum (Prescott, Arizona), Newington-Cropsey Foundation (Hastings-on-Hudson, New York), and in California, at the Natural History Museum of Los Angeles County, Pasadena Museum of California Art, and the Pasadena Museum of History.

The presence of this badge signifies that this business has officially registered with the Art Storefronts Organization and has an established track record of selling art.

It also means that buyers can trust that they are buying from a legitimate business. Art sellers that conduct fraudulent activity or that receive numerous complaints from buyers will have this badge revoked. If you would like to file a complaint about this seller, please do so here.

This website provides a secure checkout with SSL encryption.

Welcome! If you would like to know when I have new works available, feel free to sign up.

Don't fear for your inbox, I won't abuse the privilege.

Your cart is currently empty.

This is only visible to you because you are logged in and are authorized to manage this website. This message is not visible to other website visitors.

The above preview shows how to use the live preview on this website. The image displayed is just an example, and is not available for sale.

This means you can use the camera on your phone or tablet and superimpose any piece of art onto a wall inside of your home or business.

To use this feature, Just look for the "Live Preview AR" button when viewing any piece of art on this website!

Below, select which favorite lists you would like to save this product into.

Oh No, not  another Pop-up!

Yes, but hold on ..... allow me to invite you to join my newsletter email list.

What's In This For You?

You will be informed of new work added to my web gallery and any other interesting news.

But, right now I will email you a

20% incentive (discount) coupon that you can apply to your first acquisition just for opting in.

SAVE 20% ON YOUR FIRST ACQUISITION!

Enter your email below and I'll email you a 20% OFF coupon now!

This offer is valid for NEW CUSTOMERS only!